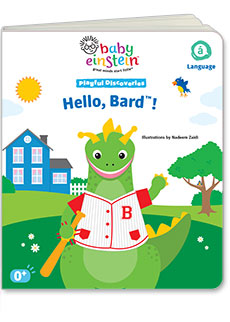 Spend a day at home with Bard and take your little one on a trip around the world. Simple, everyday phrases are given in six different languages. Babies and toddlers will see visual clues about the meaning of each foreign phrase as they look at the cheerful illustrations of Bard going about his daily routine. English pronunciations of the foreign words are included, so you will be able to say “good morning” in German or “good night” in French, even if you don’t speak a second language. It’s an easy way to introduce your child to the sounds of other languages without having to pack a suitcase.

Tie-in Activity: Put on a bilingual puppet show. Choose one of the languages included in the book, and use two puppets to “say” the phrase to each other in your own language and one other while acting it out. Feel free to repeat the phrases often, since repetition will help your little one remember the words. If your child is old enough, you can let him use one of the puppets to “speak” one of the languages.
Subscribe Now